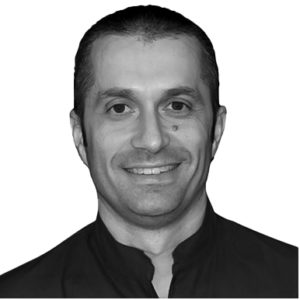 He attended the Institute «L. Dehon – Villaggio del Fanciullo” in Bologna obtaining the Degree of Dental Technician in 1995.

Working as a dental technician he attended multiple courses and masters focusing on complete and partial prosthetic dentures.

He became a co-owner of the dental laboratory Unilab Foschi, Giunchi and Cattin snc. in Ravenna in February 2002 with advanced specialization in fixed prostheses and casting solutions.

Since 2022 he attended multiple advanced courses dealing with fusion techniques, zirconium and gnathology.

Since 2009 he specialized in digital cad-cam systems working side by side with the most prestigious experts in Italy.

He became an official instructor of the ANTLO Association (national Italian dental technicians) in 2015 currently in charge of the scientific program for fixed prosthesis and digitalization.

Since 2016 he was author and co-author of multiple publications of articles in prestigious national and international dentistry magazines.

Since 2018 he became an official Rhein83 speaker attending multiple national and international courses, conferenced and scientific study groups traveling to Europe and Asia.